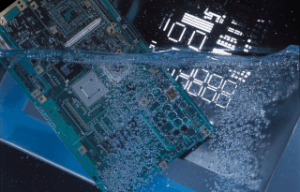 Electronics manufacturers have always treated cleaning as an essential process. They clean their products mainly to remove contaminants that are potentially harmful, including mainly solder, flux, and adhesive residue. Cleaning also removes other contaminants of a more general nature such as debris and dust left over from other manufacturing processes.

Removing contaminants from the board surface requires cleaning even before the soldering process is completed. In fact, production stages prior to stenciling may also introduce contaminants that must be removed. After stenciling, adhesives may have to be removed, while after soldering it may be necessary to clean the board of corrosive flux residues and excess solder paste.

The above requirements for cleaning at multiple steps has led manufacturers to adopt the ‘no clean’ process. Although the no clean process has flux with lower solid content as compared to that in traditional types, they still contain activators and rosin, which operators do not remove until prior to the coating or encapsulation process.

Residues left over from the no clean process, together with the additional unwanted chemicals that the missing cleaning stages collect, can adhere to the PCB surface and affect the performance of the protection media applied. Therefore, even advanced technologies involving ‘no clean’ fluxes do not guarantee a clean board after assembly, especially for the high-speed and high frequency requirements of the electronic industry.

Additionally, cleaning stages are also required for removing the adhesives and coatings when re-work is necessary, for cleaning components, and for keeping the production line operational.

Along with their individual advantages and disadvantages, features common to all the solvent cleaners include fast evaporation and single stage cleaning. However, even these new cleaners require specialist equipment including extraction as protection against toxicity and other possible hazards.

To limit ozone-depleting emission from solvents, manufacturers have also developed water-based cleaners, which have several advantages such as low odor, non-flammable properties, low/non VOC, and low toxicity over their solvent-based counterparts.

Applications for cleaning mainly depend on equipment such as spray under immersion, ultrasonic, or dishwasher type application. This makes it essential to identify the proper water-based cleaner for the specific job. In actual practice, water-based cleaners are much more complex compared to their solvent-based counterparts.

Water-based cleaners work in different ways. Some make use of surfactant technology for removing contaminants from the surface of a PCB. They reduce the interfacial tensions and suspend or emulsify the contaminants in solution. Other types of water-based cleaners, mainly flux removers, use saponification to neutralize the flux acids. However, water-based cleaners require multiple stages in the cleaning process to complete the action. These include a two-stage process of rinsing, along with a final drying stage.

Ionic residues are flux residues and harmful material soldering leaves behind after the reflow process. Water-soluble organic or inorganic ionic residue often disassociate in a solution of charged ions, thereby increasing the overall conductivity of the solution. This degrades the reliability of electronic components and assemblies on the PCB as it contributes to current leakages between the circuitry. This also causes increased corrosion and promotes dendrite growth.

Non-ionic residues are mainly rosin, grease, and oils, and usually organic and non-conducting. Board fabrication or assembly processes usually leave behind this residue. The insulating properties of non-ionic residues are a problem for plug-in contacts or connectors on the assemblies. Presence of such residues can cause solder mask, potting compounds, conformal coatings to adhere poorly. Moreover, these can encapsulate foreign debris and ionic contamination.

Both non-ionic and ionic contaminants affect the operation and reliability of the PCB on which they are present. However, a larger proportion of circuit failures are due to ionic contamination.

As the electronic industry expands, and the cleaning market develops with it, it is important to define the metrics for assessing the cleanliness a specific application requires. As most flux residues and contaminants are invisible to the naked eye and even under magnification, it is important to use a proper method for determining the level of cleanliness achieved, and assessing compliance to the specified standard. A number of methods are available to assess the level of cleaning for both ionic and non-ionic contaminations.

Visual examination is an important process usually employed alongside other methods, although it does not provide quantitative information. It is the simplest method for monitoring both types of residue—the visual part, often accompanied by a magnification of around 10-15 times. This process is adequate for most production processes including handling and packaging.

Another method of optical examination is the FTIR or Fourier Transform Infrared Spectroscopy, specifically for measuring non-ionic residue. An analytical method, it efficiently determines the precise quantity of contamination present.

Hi-Vis Spectroscopy and High Performance Liquid Chromatography or HPLC are methods to identify residual rosin. Other methods of identifying residues and contamination of a PCB are Scanning Electron Microscopy or SEM and Energy Dispersive X-ray or EDX.

Each of the above methods has their own advantages and disadvantages. In general, the equipment necessary to implement these methods are expensive and rarely used in production environments.

A number of electronic assembly houses use a simple automated version of ROSE testing. They utilize the ZeroIon, Ionograph, or the Omega Meter for measurement and quality control testing. IPC-TM-650 defines a standard for the industry, where a solution of deionized water and isopropanol extracts the contaminants whilst the meter measures the change in conductivity. Although offering rapid results and being widely accepted, the above method of testing has its restrictions, being suitable for traditional rosin-based fluxes and ionic contamination.

IC or Ion Chromatography and SIR or surface insulation resistance are two further methods for measuring the level of contamination on the PCB surface. The SIR process measures changes in electrical current over time at higher than normal temperature and humidity levels. As the insulation resistance decreases with the increased presence of contamination, the current flow changes between an interleaving patterns of combs on the PCB.

A more modern method, Ion Chromatography or IC, evaluates the PCB cleanliness by identifying and quantifying specific ionic species present on the PCB. The test method offers a list of ionic residues that specific media can remove.

The required level of cleanliness is entirely dependent on the selection of the most suitable cleaning process, and this is the key to achieving maximum cleanliness and reliability at minimum cost.